I find the more engrained I get into something the harder it is to write about it unless I am writing about new features. There are 100 other bloggers out there that do just that though and do it as good or better than I can (Check out Peter Van Der Woude and his blog).

So this blog usually ends up being things I find interesting or things that I personally want to keep around to reference. This falls into that latter category.

When deploying and testing wrapped apps there can be a significant between when you make changes and when it gets to device. You could even be hitting the three try limit on the extension and have to wait a really long time. Today I want to show you, and remind future me, how to clear that out so IME sees the app as a fresh install and trys again right away (relatively).

First we have to understand how the IME actually logs its attempts for installing apps.

Now if you wanted to wipe everything out you could just delete everything but lets just say you want to precision strike a certain app for a certain user. You first need to identify the users GUID using the console. Their GUID is actually the last part in the web url after userID, see the image below

Now that we have the relevent information we can go to the reg key mentioned earlier and just delete the entry for the specific app we want to force a retry on. Here is a screenshot example from a test machine of mine. Remember to delete the app GUID and not the user GUID if you only want to nuke one app. 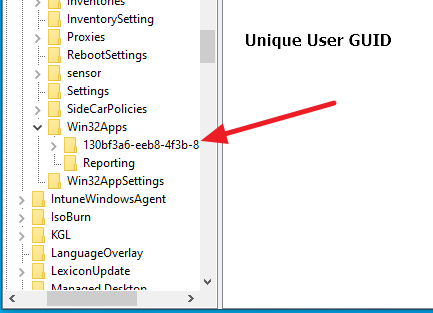 Once your chosen values are deleted simply restart the IME service and it should reevaluate what apps need tried again shortly after.

Hopefully this speeds up some of your testing.

Talk to you all next year!

Posted by amobileattempt at 1:24 PM No comments: